Today I’m finally sharing our Barn Beam Mantel Reveal! This project was much more simple than I thought it would be, and I could not be more happy with the results!

I have long anticipated this barn beam mantel reveal, it’s something that I envisioned for so long and it’s surreal to be finally sharing it today!

Wow…what a transformation this fireplace has gone through over the last 8 years since moving in. When we decided to move the TV above the fireplace, my husband added built-ins on either side and a cabinet above to hide the television.

In 2017 I had the awesome opportunity to work with AirStone, and my fireplace went from painted brick to stone.

In 2018, I gave the fireplace an update and decided to try the German Schmear technique on my stone. This gave it an old world feel which I absolutely love! We also added shutters to hide the television.

Just last year I accented the back of my built-in shelves with dark gray for a pop of color.

About a month ago I was inspired by a vintage fireplace grate that we found on Facebook marketplace, and we purchased another box of AirStone in order to add an archway over the fireplace opening.

We then switched from our ventless gas log set to an electric wood burning stove.

In the antique haul I shared this past March, I showed you guys another Facebook marketplace treasure. The beautiful 100 year old beam that we scored for $60.

I have always wanted an authentic reclaimed beam on our stone fireplace, and I was so thrilled because this one was literally the perfect width and length! It was meant to be haha!!

We took it home, let it dry out and sanded it down with 120 grit sand paper. This helped to lighten the finish and soften the rough wood.

Since our old mantel held our DVD player and cable box, we were a little torn about replacing it with a barn beam. After a lot of thought, though, we decided that we were paying a lot for cable when we rarely watched TV. So we decided to upgrade to a smart tv and get rid of the cable box. I hope we made the right decision! So far it hasn’t been an issue at all, though. 🙂

The beam naturally sloped upward, so I knew that I wanted the shorter side to sit on bottom.

I also ended up keeping the tenon (thank you guys for telling me what that was!) because it was just so cool!

Thankfully most of the beam is supported by the fireplace, but my husband did put a 2×4 in the wall right above the fireplace, attaching it to studs on either side using 2.5 inch deck screws.

He then created a frame using more 2×4’s that the barn beam would attach to. In order to secure the beam to the frame, he used 3.5 inch deck screws.

I wish I had taken more photos of this process, but my husband did all of this while I was outside with the boys. I thought he was just taking measurements…little did I know he was installing the beam! If you would like to see more of the installation process, please watch the YouTube video linked at the top of this post! 🙂

Once the beam was in place, I filled the gap between the stone and wood using joint compound, the same product I used for the German Schmear technique.

Honestly, that was it! I just love the character and warmth this beam adds to my living space. It’s very different than the simple white mantel that was there before, so at first it was something I had to get used to!

With each day that goes by, I fall in love with the beam more and more. I truly feel like it adds old world charm to my home and fits in so well with my cottage style!

What do you guys think about our new barn beam mantel? Let me know in the comments below! 🙂

PIN IT FOR LATER… 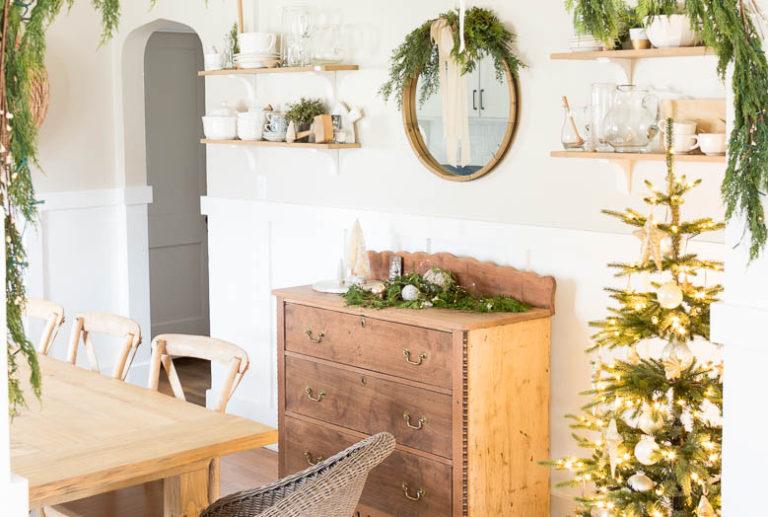 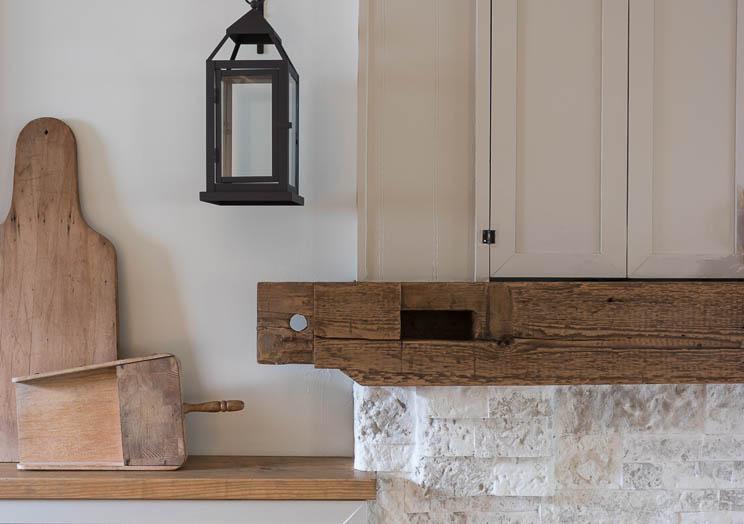 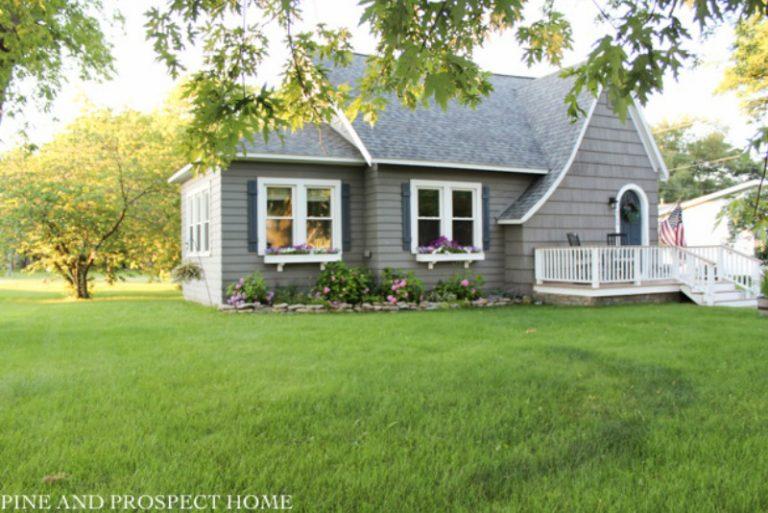 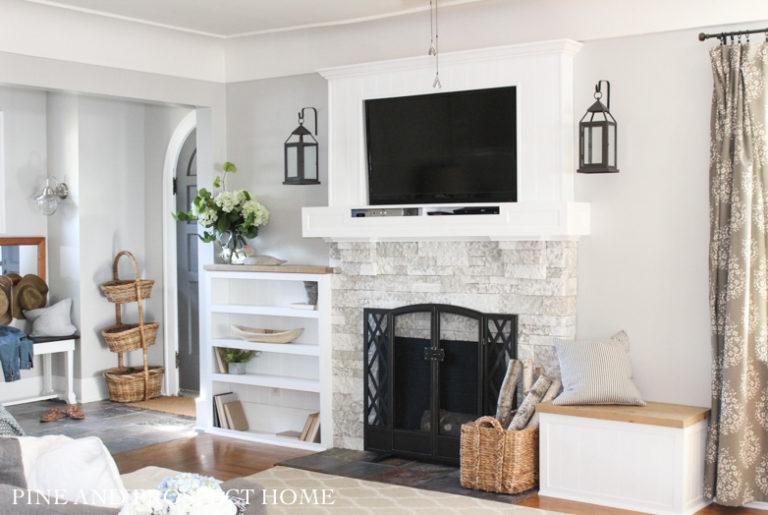 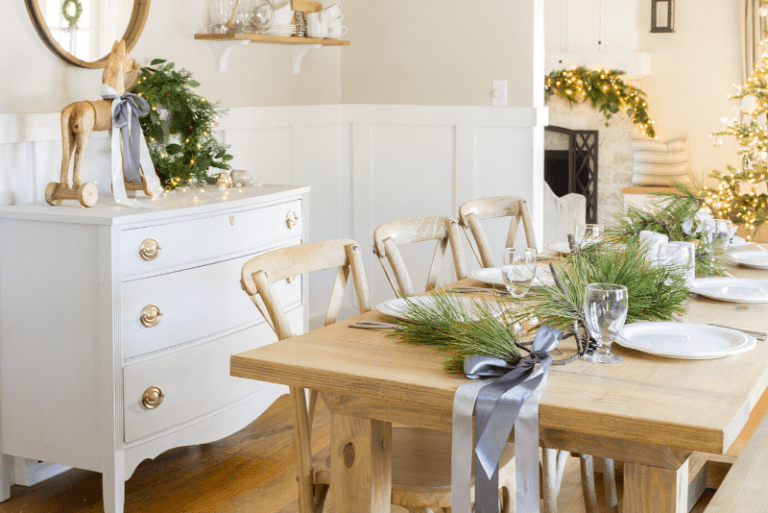 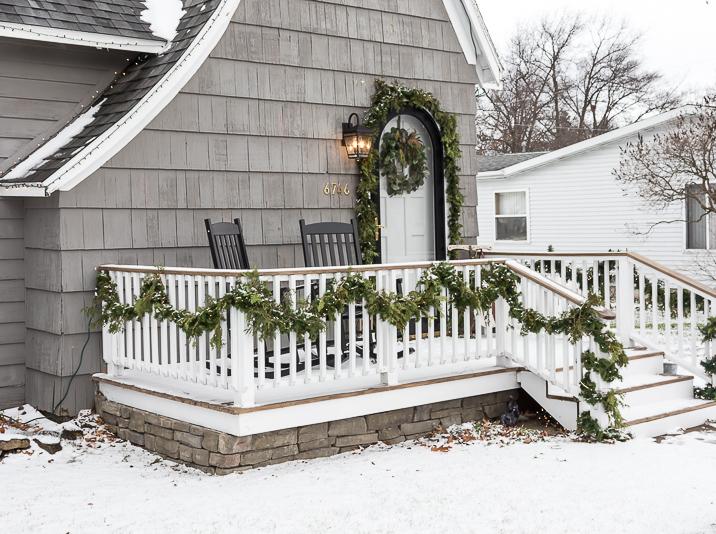